Top 11 excursion tips in the region

Edersee passenger shipping
During the season, the Edersee passenger boat company offers scheduled round trips on Lake Edersee. The boats shuttle between Sperrmauer, Waldeck, Halbinsel Scheid, Bringhausen, Asel and Herzhausen. The passenger boats can be heated and are disabled-friendly. You can board and disembark without steps at all landing stages. More information is available at the hotel reception and on the internet at:
www.personenschifffahrt-edersee.de

Summer toboggan run with Eurobungee and adventure golf
The summer toboggan run at the Edersee is only a few hundred metres away from our hotel. There are further attractions in the lovingly landscaped park: Quad biking, climbing, bungee, the Nautic Jet, giant motor swing, pedal boating and mini golf. This small amusement park with a castle is open from the Easter holidays until the end of October. More information about opening hours at the hotel reception and at www.sommerrodelbahn-edersee.de

City of Waldeck
Waldeck is a picturesque little town and a recognised climatic health resort in the North Hessian district of Waldeck-Frankenberg. Waldeck is known nationwide for its location on Lake Edersee and for the impressive Waldeck Castle on a hill high above the town - easily reached by a gondola from the Waldeck mountain railway. From the castle grounds you have a fantastic view over Lake Edersee. There is a museum in the castle.

Waldeck Castle and Castle Museum
Today, behind the historic walls of the former castle of the Lords of Waldeck, there is a hotel and a castle museum. The castle is located on a 120-metre-high mountain, dates from the 11th century and is a landmark of the region visible from afar. Once at the top, you have a magnificent view of the surrounding forests, the Kellerwald and Lake Edersee. The castle museum displays exhibits from the Middle Ages and takes visitors back to a dark and spooky prehistoric era.

Baumkronenweg
High above the forest floor and through the highest treetops of proud tree giants leads the spectacular treetop path at Lake Edersee - built on the Eschelberg in the immediate vicinity of the wildlife park. Through this unusual change of perspective, away from the ground and up into the highest levels of vegetation, you perceive nature in a completely different way - as if you were a part or even an inhabitant of this forest. The TreeTopWalk complies with strict nature conservation regulations and serves as a nature-oriented leisure experience for visitors. More information is available at the hotel reception
and on the Internet at www.baumkronenweg.de

Wildlife Park
The Edersee Game Park was opened in 1970 and covers about 80 hectares. In addition to various animal enclosures, a large outdoor enclosure, a petting zoo with goats and pot-bellied pigs, there is also a bird of prey station and a small playground with climbing equipment. In the park grounds, a circular path about 2.5 km long with several side paths leads along the enclosures. There you will meet animal species such as wolf, lynx and bison. Red deer, fallow deer and mouflon even move completely freely in the wild animal park. The animals can be easily observed from several viewing platforms. In some places there are boards with information about the animal species, the origin of the animals, reproduction and dates of birth. Dogs are not allowed in the park. More information is available at the hotel reception and at https://www.wildtierpark-edersee.eu/

Cavern power plant
The Waldeck pumped storage power plant consists of two pumped storage power plants, the two upper reservoirs Waldeck I and Waldeck II, as well as two open-air switchgears, which are located in the Kellerwald forest at Lake Affoldern near the Edertal district of Hemfurth-Edersee. They were built to generate electricity using the large gradient via pressure pipes and turbines. A turbine hall required for this purpose was built in a cavern in the mountain, which is why this is called a cavern power plant. The cavern is 106 m long, 54 m high and 33 m wide. More information is available at the hotel reception and at www.erlebnisregion-edersee.de

Climbing park
The Edersee climbing park is the perfect destination for the whole family. Multiple courses with different levels of difficulty and heights provide a special experience for adults and children alike. A special physical condition is not necessary for participation; normal health is quite sufficient. More information is available at the hotel reception or at www.kletterpark-edersee.de

Maize maze
The maize maze at Lake Edersee is ecologically degradable leisure fun - open from July to October. Attractive leisure fun and a unique experience for the whole family. More info on opening hours at the hotel reception and at www.maislabyrinth-edersee.de

Old cathedral city of Fritzlar
Fritzlar is a small town and an economic centre in the Schwalm-Eder district. The origin of the town goes back to a church and monastery foundation by Boniface. Fritzlar's St. Peter's Cathedral is one of the most historically significant architectural monuments in the region. Its predominantly Romanesque structure dates back to a building begun in 1085/90, which was largely renovated in the late Romanesque period. Until the 19th century, a large number of further building measures were carried out, which determine the harmonious appearance of the cathedral today. (Source: Wikipedia)

Kassel-Herkules
Hercules is a copper statue of the Greek demigod Heracles in Bergpark Wilhelmshöhe in Kassel. The statue is located at the top of a pyramid that stands on the octagon, the giant castle. Since 1717, Kassel's landmark has been enthroned on the summit of the Karlsberg at a height of 530 m above the city. The structure is the crowning glory of the 1.5-kilometre-long cascade.

The Bergpark Wilhelmshöhe is unique in the world. It is considered Europe's largest mountain park and is famous for its unique wealth of trees and plants, the museums and sights and, of course, the Hercules and the water arts. On 23 June 2013, Bergpark Wilhelmshöhe and its water arts were added to the UNESCO World Heritage List. 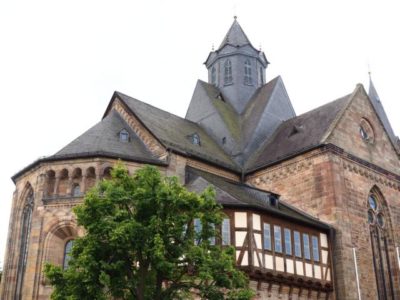 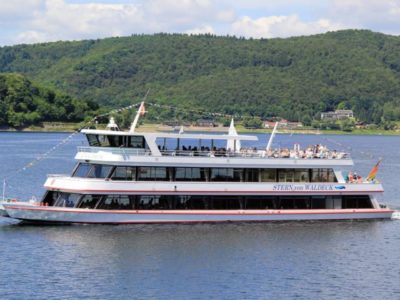