What could be more beautiful ...

... than to go on a bike tour around Lake Edersee in the most glorious sunshine?
Response:

Two, three or even more cycling tours at the Edersee. Our holiday region has developed into a real Eldorado for cyclists in recent years. This is due firstly to the many new, well-marked cycle paths and secondly to the many different types of bicycles that are available today. By the way, you can store the bicycles you have brought with you in our in-house garage, and you are welcome to charge your e-bike here.

Our Flair-Hotel Werbetal is simply ingenious as a starting point for cycling tours, because both the "ER" (Around Lake Edersee) and the "ER1" (Sachsenhäuser Hügelland and picturesque Werbetal) lead right past our house. This allows you to get on your bike right outside our front door and set off in all directions. Both the ER and the ER1 are connected to the large cycle path network, so you can easily switch to other cycle paths, such as the ER5 or the Ederseebahn cycle path.

We have listed three of the most beautiful routes here for you.
Further cycle tour suggestions are available from us at the reception or from Edersee-Touristik GmbH at www.edersee.com 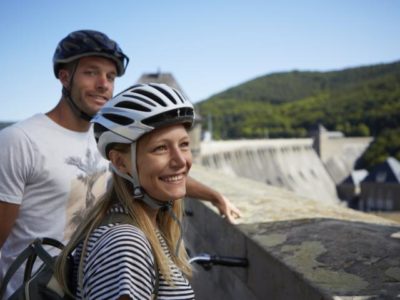 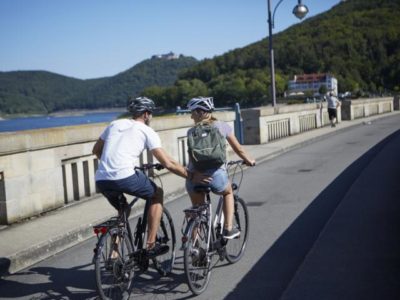 An experience for the whole family is the marked Edersee-Rundweg (ER). The 50 km long tour leads around the blue Edersee on mainly asphalted paths. The alternation between water and forest makes this tour an unforgettable experience. Numerous vantage points and rest stops along the way invite you to relax and unwind. Total length 50.3 km, of which 18.7 km gravelled, 31.6 km asphalted.

The Eder Cycle Path accompanies the Eder on its journey through beautiful landscapes in North Rhine-Westphalia and Hesse. The 168 km long dream tour begins in Erndtebrück and leads on mostly quiet cycle paths and farm tracks without any notable climbs to the Fulda in the Kurhessisches Bergland. Here the Eder flows into the Fulda and the Eder Cycle Path becomes the Fulda Cycle Path R1.

A tour on the Ederseebahn cycle path

To experience the beautiful Waldecker Land to the full, the best way is by bike. New and indeed spectacular is the new cycle path over the former railway line of the Ederseebahn, which once connected the Ruhr area and the spa town of Bad Wildungen. The trail, which is asphalted throughout, runs for about 27 km from Korbach to Buhlen am Edersee, passing several tunnels, deep cuts, old railway stations, high embankments and bridges with magnificent views, such as the "Selbach Viaduct". The average gradient of the entire route is just 2%. 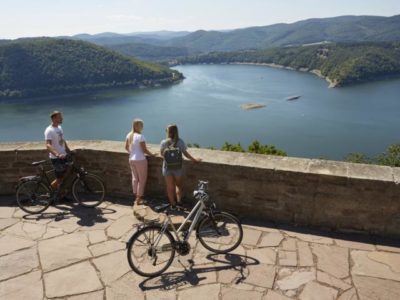 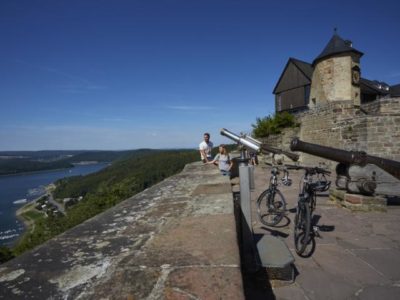